How Do I Fight a Red Light Ticket in New York? | Law Office of James Medows 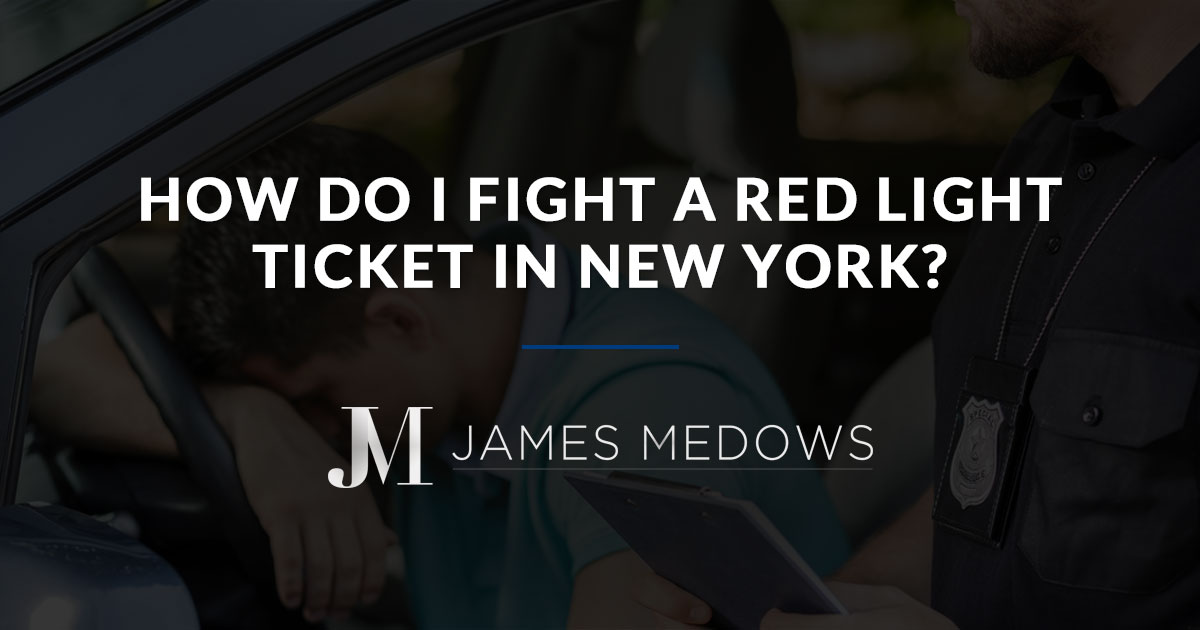 28 Aug How Do I Fight a Red Light Ticket in New York?

Posted at 16:35h in Blog by Glenroy Boatswain

Navigating intersections is complex, and traffic lights aren’t perfect. Between dangerous drivers, lights that aren’t synced, and other factors, getting through an intersection without a car crash can be tough. Sadly, you might have been pulled over right after that and ticketed.

So, how do you fight a red light ticket in New York? There are a few key steps to disputing a ticket, so reach out to your New York attorney for help with your case.

When you’ve been ticketed for a traffic light offense, finding the right defense is essential to your case. Your defense will be the first step in getting your traffic ticket reduced or dismissed, but every case is different. For example, you might have been unable to stop because the driver behind you was distracted and would have rear-ended you if you didn’t drive through the red light.

That means you might have seen some defenses online, but you’re not sure where to turn. You need a defense tailored to your case to avoid traffic ticket penalties. For that, you may need a New York lawyer on your side. We can review the details of your traffic stop and help you avoid points on your license.

A compelling argument may not be enough to get your red light ticket dropped. Instead of bringing your defense alone, you will need to gather proof. It’s your word against a police officer’s, so you need evidence to support your case.

Taking photos of the intersection may help, depending on your defense. For example, if you think the officer had a skewed view of the scene, you might take pictures from the point where the officer was. That way, you can show that their view was blocked by trees or signs.

In other cases, your lawyer may use their resources to review when the traffic signal changes. If the lights aren’t synced properly, the opposite traffic light might not have changed in time with your light. That means you might have been following the traffic light, but the other light was wrong.

If you’re not sure what evidence you need for your defense, your New York red light ticket attorney can help. We can review your case and help you find the evidence that supports you.

If you’ve been pulled over for a red light offense, you may have grounds to fight your ticket. However, that doesn’t mean it’s easy to fight red light ticket in New York, especially alone.

Instead of tackling your case alone, seek a lawyer from the Law Office of James Medows. Our attorneys can offer an aggressive defense that can result in getting your ticket reduced or even dismissed completely.

If you’re interested in our services, reach out to a New York red light ticket lawyer by calling 917-856-1247 or by filling out the online form below.