Does NYPD Use Quotas When Issuing Tickets? 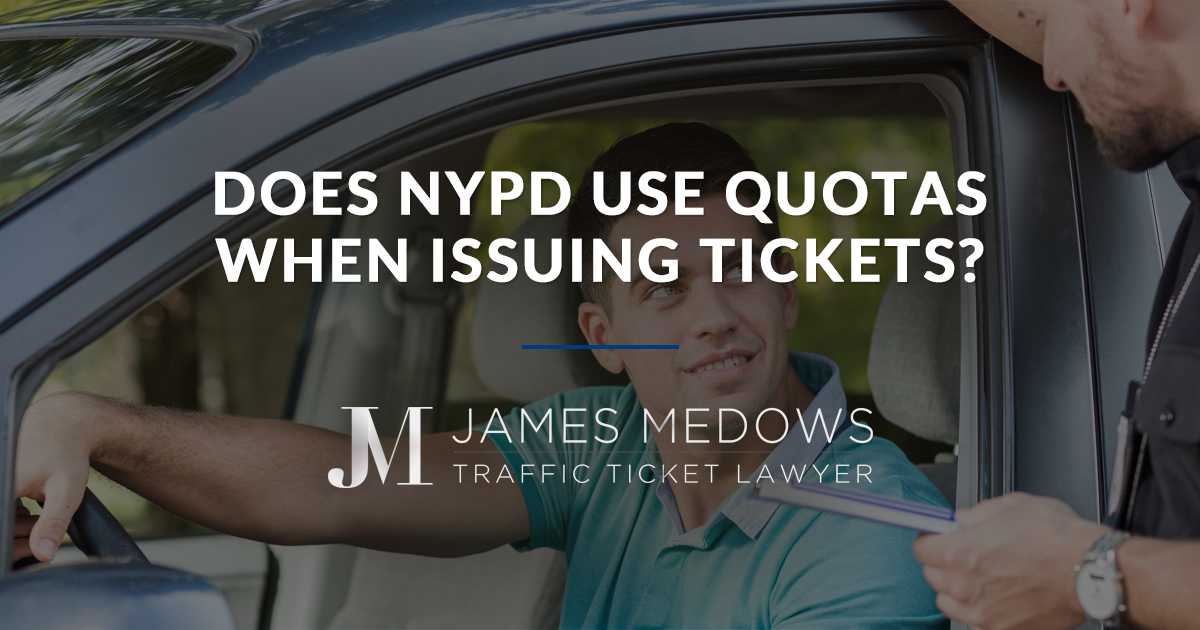 28 Sep Does NYPD Use Quotas When Issuing Tickets?

Many drivers have long believed that they’re more likely to get a ticket for a moving violation toward the end of the month, when officers are making up for lost time and trying to meet their monthly ticket quotas. But ticket quotas are illegal in New York City, leading others to dismiss this suspicion as simple rumor, maybe with a little paranoia thrown in.

A recent analysis by a local statistician suggests that there may be something to the quota idea, but if you find yourself on the receiving end of an NYPD traffic citation a day or two before you turn the page on your calendar, it’s still most likely just bad luck.

Lots and Lots of Tickets

Jonathan Auerbach looked at all tickets written by the NYPD from 2013 to 2015 (that’s around 3 million) and determined that, in fact, the number of tickets written per day slowly increases as each month goes on—by 10 percent or more for all types of offenses.

The increase, however, showed no relation to crime statistics over the same time periods, leading Auerbach to conclude “that the increase in tickets is not in response to traffic conditions or directed at reducing hazardous conditions.”

In other words, the NYPD does seem to ramp up its ticket writing as the end of the month approaches, with no connection to offenses committed. So it’s true—you really do have a greater chance of getting a ticket near the end of each month.

But Wait—It’s Not So Simple

On the other hand, there is probably no need to worry about being singled out or getting a lot of extra tickets as the last day of any month looms.

Even if you are unlucky enough to be ticketed more than once in a month, says Auerbach, “you would need to amass more than 250 tickets to have enough statistical evidence to conclusively establish that you personally were the victim of inconsistent policing.” So carry on doing what you’ve been doing—as long as you’ve been doing it safely.

Auerbach, by the way, is a PhD candidate at Columbia and was named the American Statistical Association’s first “Public Understanding of Statistics Fellow” in 2016. He’s also the man who crunched the numbers to debunk the urban myth that there’s one rat per person in New York City.

Officers themselves have been against quotas in the past. In June, a directive by Mayor de Blasio to hire more officers to work as traffic enforcement agents was seen as a potential ticket quota system by another name. The president of one of the city’s police unions criticized that plan as distracting from the proper use of police resources.

The city this year settled a federal suit alleging that the NYPD issued over 900,000 unsupportable tickets to meet quotas. The NYPD denies that it uses quotas, but the city still agreed to a $75 million settlement, and the NYPD said it would work to reinforce the ban on quotas and launch investigations when officers are suspected of applying them.

When you receive a traffic ticket in New York, whether it has anything to do with a quota or not, it’s important to understand that even the most minor violation can lead to points on your license and a surcharge on your insurance. However, most tickets can be fought, and many will be dismissed or reduced when challenged.

At the Law Office of James Medows, we don’t simply have experience with NYC traffic ticket cases—they’re our focus. We’ve helped many clients reduce or entirely overturn their tickets. Call us today at 917-856-1247 or fill out the contact form at the bottom of this page to schedule your appointment.